Dennis Tobenski is a composer of acoustic new music whose work has been described by Anthony Tommasini of The New York Times as “distinctive and engaging”. He is also a vocalist and a strong advocate for new music and for the interests of living composers.

Dennis’s Only Air, a 20-minute work for high voice and orchestra memorializing the gay teenagers who have taken their own lives in recent years, was commissioned by the Illinois State University Symphony Orchestra, and premiered on April 25, 2013. A chamber version of the piece was commissioned and premiered by The Secret Opera, which based in NYC. The chamber version received its West Coast premiere in November 2014 by members of the Bay Area Rainbow Symphony as a part of the American Psychiatric Association’s annual Institute on Psychiatric Services.

Called a “dynamic vocalist” by Mr. Tommasini, and “a skillful and sensitive singer who shapes phrases and renders text with expert care” by Gregory Berg of Journal of Singing, Dennis’s focus as a vocalist is primarily on the works of the 21st and late 20th centuries. He has premiered works by David Del Tredici, Chester Biscardi, Ricky Ian Gordon, Darien Shulman, and Hadar Noiberg, among others.

In February 2016, he and pianist Marc Peloquin released their first album together, a disc of 19 art songs by living American composers. The album, titled And He’ll Be Mine features works by David Del Tredici, Chester Biscardi, Zachary Wadsworth, Darien Shulman, and Dennis Tobenski. The duo founded Perfect Enemy Records in 2014, and plans to record their next album in Spring 2018: a retrospective of Dennis’s vocal works to date.

Dennis has also hosted two music business-centered podcasts aimed at helping composers and performers to learn more about the practical aspects of their careers: the Music Publishing Podcast, a weekly, hour-long conversation with other professionals in the field of concert music, and The Composer’s Guide to Doing Business, where he answers questions and discusses current issues the new music community.

Through his music publishing company NewMusicShelf, which represents more than 200 composers through the NewMusicShelf Anthologies of New Music, he has won three Paul Revere Awards in Graphic Excellence from the Music Publishers Association of the United States for his skill as a music engraver and editor. In 2021, NewMusicShelf released an anthology of 21 art songs, arias, and music theatre pieces specifically for trans and nonbinary voices: a historic, first-of-its kind publication.

Dennis received his B.Mus. in Vocal Performance and Music Theory & Composition in 2004 from Illinois State University, and his M.A. in Music Composition from The City College of New York in 2009. His principal teachers have included David Del Tredici, Chester Biscardi, and David Feurzeig. He has received fellowships from the Virginia Center for the Creative Arts, the Prairie Center of the Arts, the Ucross Foundation, and the Staunton Music Festival. He recently joined the Board of Advisors of Composers Now.

Dennis lives in New York City with his husband Darien Scott Shulman and their cat Pistachio. 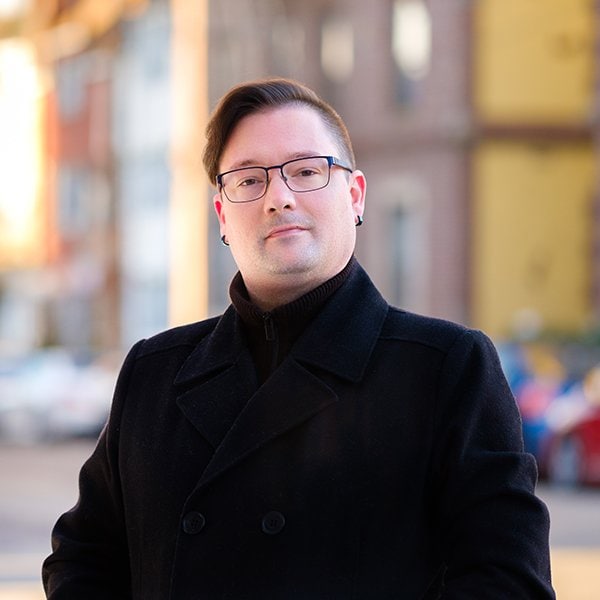 Only Air, for high voice and orchestra
And He’ll Be Mine, for tenor and piano
It Is Not Always May, for mixed choir with piano
Growl, for solo piano

“The Gallant Weaver” from And He’ll be Mine
Dennis Tobenski, tenor; Marc Peloquin, piano
Available on Perfect Enemy Records

It Is Not Always May
Illinois State University Concert Choir
Live Performance, 24 April 2016